In the wake of the LGS 1A1 scandal which promoted the termination of 4 teachers who were accused of sexual harassment, former students of the actor Omair Rana, who was also a drama teacher at the same school, have come forward with sexual allegations against him.

As per a tweet consisting of instagram stories screenshots by an alumna of LGS, minor students have been harassed by the actor. 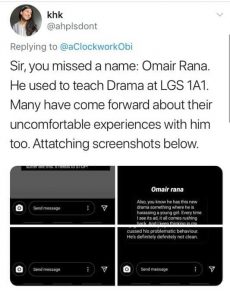 “So many girls had issues with his behaviour. He used to flirt and his body language was also inappropriate,” the alumna wrote. She also said that the administration had been contacted however they didn’t pay any heed to the female students complaining because of the actors social standing.

The actor is known for taking part in shows with strong social commentary regarding issues such as domestic violence. One twitter user called him out on his hypocrisy. He is currently starring in a drama wherein he plays the negative role of a step father in law who can be seen harassing his younger daughter in law. A twitter user wrote that the role must’ve been easy for him as he’s playing himself.

Many of the students have also accused the actor’s wife, Maira Omair Rana, who is part of the administration at LGS, of covering up the story and instead of helping the victims, resorting to victim blaming. A student disclosed that whenever girls complained to her she reprimanded them on their ‘revealing clothes’.

“She even said to the victims that they should not come to her for their complaints,” the student writes.

Facebook Comments
Previous Article
In 2010, my worst nightmare was attending a chemistry professor’s class and LGS Defence is to blame
Next Article
Former student calls out teacher who taught at KIPS Lahore for 6 years for alleged harassment