31 years ago to the day, tanks rolled down Tiananmen Square in Beijing to shut down student-led demonstrations against government corruption, inflation and restrictions imposed on freedom of speech and democracy. With hundreds to thousands of protesters killed, and wide-scale political repression in its aftermath, the massacre is remembered somberly. But within this tragedy, a confrontation was captured on video which made an iconic mark on history.

As the tanks left Tiananmen Square, a single anonymous man, holding two shopping bags at his side, stood in front of the line of tanks in defiant opposition; when the tanks attempted to sidestep him, the man who would come to be remembered as Tank Man, moved to stop them in their path. He conversed with the tank-operator briefly, before standing in their way again. But shortly thereafter, Tank Man was pulled away by people, either members of the Chinese government or what seemed to be concerned civilians, based on their body language. 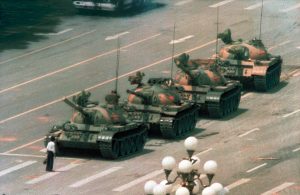 Tank Man was never seen or heard from again.

That footage remains as powerful, symbolic and relevant more than 3 decades later; it shows the immense courage human beings are capable of. An entire column of tanks stood before Tank Man and he did not budge an inch, portraying the depth of frustration and helplessness in the face of vast, powerful armies and governments. The defiance against dictatorship and the state’s political repression captured in that one image became an icon of the fight for freedom.

Tank Man’s silent and unarmed protest, his outright rejection of violence, is more relevant today than ever. A tsunami of protests against police brutality and racism has washed across the entire world. This may very well morph into a revolution that will take its place amongst the great revolutions in history, and for good reason. Black people have suffered far too many political, social and economic injustices for far too long and it is high time that society treats them with the equality they deserve as fellow dignified human beings, and the best way to do so is protest. Many great movements, from the creation of Pakistan, to the ending of apartheid were created after protest. Black Lives Matter is a protest movement that may finally shatter the racist structures that have held black people back throughout history.

Black Lives Matter and Tank Man: No space for violence

Unfortunately, many of these noble protests have spiraled out of control into violence; police officers have been accused of macing and tear-gassing peaceful protesters. On the other hand, President Trump has accused the protesters of looting and violence. The truth is hard to measure as both accusations have limited anecdotal support. It is abundantly clear, however, that violent protesters are in the minority. Video footage of hundreds of protesters peacefully demanding a complete restructuring of the policing system can be found throughout social media. Video footage of protesters deliberately encouraging violence are much more scarce, if at all present.

However, some liberals have the radical belief that violent protest is necessary in order to bring about substantial change, an idea which has become increasingly prevalent in the left.

How violent protests empower the oppressors

When protests turn violent, reportedly often at the urging of undercover cops, they give the police, and more importantly, their political opponents, an excuse to crackdown on them. With the ongoing BLM movement, President Trump has repeatedly justified the crackdown on the protesters to his followers by referring to the property damage being caused. A slight action of violence breeds more violence and may potentially result in a massacre like that of Tiananmen. More importantly, it also alienates people from the movement; people who profoundly believe in BLM, or even conservatives who have relatively liberal ideas of race (they exist), may withdraw their support if they believe the movement to be built on violence.

Any violence that occurs will directly affect members of the same class the movement is trying to uplift; the suppressed common people have always faced the brunt of violence, and the elite and powerful have always managed to avoid significant long-term damage.

Some, however, point out that all successful movements had some amount of violence in them, such as the democratic revolutions of the 18th and 19th centuries, but this may be a misguided parallel. The world has changed considerably since those times and now, especially in the USA, there are numerous alternatives to violence to bring about social change. Peaceful protest in a democracy is a powerful tool. Economic boycott in a capitalist society is a powerful tool. Gathering international pressure and spreading the word through social media is a powerful tool.

Will George Floyd’s death be remembered three decades from now?

Tank Man’s identity and eventual fate remains a mystery, but the fate of George Floyd was sealed on May 25, as he uttered his last haunting words, ‘I can’t breathe’. It is up to the oppressed to decide how to protest, and how to take back the autonomy that has been stripped so systemically from them; but for a protest that was born out of such a horrific act of violence, the BLM movement remains majorly peaceful, if not entirely.

Tank Man stood against violence all those years ago, although his footage within China faces strict censorship and he is fading fast from China’s collective memory, one can hope that not only will the memory of George Floyd remain alive, but the tragedy and violence of countless repeated incidents will culminate in a change that soon won’t be overruled.