The Flip Side- TRANSfer some rights

The Flip Side- TRANSfer some rights

Imagine. Imagine disgust embracing people’s faces the second they see you. Imagine being a child, wrapped in the folds of innocence, and having nothing but abuse and defiance cast upon you. Imagine a world where your very existence is a crime bigger than any other. But again, all you can do is imagine, right?

Well, this is the everyday life of a transgender.

Take a moment to think back and recall the earliest memory you have of interacting with a transgender. In my case, I still remember being a child and having my car stop at traffic signals and seeing these interesting individuals walking around, dressed up, knocking on car windows and asking for money. From the very beginning of our lives, the most we’ve ever heard from them is well-wishes.

The antagonizing lifestyle led by the majority of the transgender community in Pakistan is painfully hidden in plain sight. However, the bravery shown by those making the decision to stand up for their rights is commendable. It is high time we learn of that which has gone unnoticed for far too long; that which will shake our understanding of society, which we acknowledge exists but refuse to think about.

This lies outside our suffocating and protective bubble and is the opposite of what we believe.

This is the Flip Side. 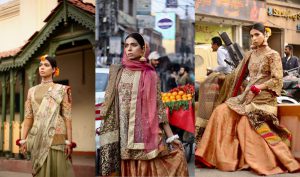 The Flip Side is a campaign started by three students of the Lahore Grammar School: Fatima Zia, Meerub Taimur and I, Anoushey Khan. We initiated it for our Global Perspectives final CIE project but it ended up becoming something none of us had foreseen: a reality check. We interviewed all kinds of people for our project; businessmen, housewives and children and surprisingly, most of them did not even know what the term ‘transgender’ meant. The more understood word amongst the public was the derogatory term ‘khusra’. Nobody really knew about their identity but when it came down to making jokes, everybody showed great involvement.

Through The Flip Side, we decided to do something about the misconstrued perception of the transgender community. 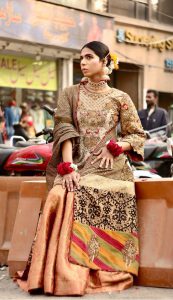 After much difficulty, we were able to hire a talented transgender model, Mavia, and organise a fashion photoshoot in Anarkali, one of the busiest areas in Lahore. This was further made possible with the help of the NCA graduate Umar Khan a.k.a. Ukhano. With extreme grace and elegance, Mavia carried her outfits made by none other than JEEM. We believe that this photo shoot in itself can remove the stigma associated with the transgender community and promote acceptance. Our main goal is to spread awareness about the discrimination the transgender community faces in Pakistan. A society that is inclusive and celebrates differences rather than looking down upon them is a society that has the potential to be progressive. Acceptance and inclusivity is the whole ideology behind The Flip Side and we would like for you to join hands with us this Women’s Day.

Join hands in celebrating their femininity.

Join hands in accepting who they really are.

Join hands in breaking the norms and bringing a change.

Join hands with us for a sight into the Flip Side. 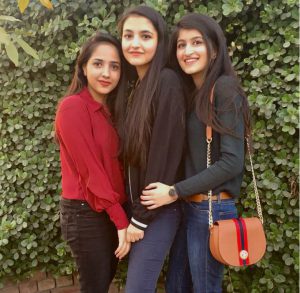 Facebook Comments
Tags::
Previous Article
The Characteristics of a Typical Fancy Cafe Meetup
Next Article
AI and the Grim Reaper- Tip of the Iceberg