Afsaneh, a Pakistani clothing brand by Naseem enterprises and trading pvt limited has allegedly laid off around 50 employees due to the stressful economic condition in April 2020.

Employees claim that neither managerial staff nor labour staff was paid before they were given their contract termination notices.This has left the employees in despair as they find themselves jobless in the harsh coronavirus pandemic. Additionally, there is also the issue of the employees who left last year that claim that their dues are unpaid till date. 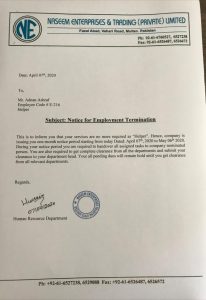 The former employees of Afsaneh have reportedly sent a grievance letter to Mr Hussain Fazal the CEO of the clothing brand, to request for their dues. But they haven’t recieved a reply in response. ProperGaanda’s editorial team also reached out to Afsaneh for a comment, but the brand has yet to reply.

Notable activists like Ammar Ali Jan, Nida Kirmani, Nighat Dad and Nayab Gohar Jan have called out for a boycott against the clothing brand on their respective twitter accounts.

Hearing disturbing news of #Afsaneh firing workers right before Eid. The way in which indistrialists have treated employees during Ramzan reveals utter lack of humanity of our elites. We must stand with the fired workers. #BoycottAfsaneh

1000s of Lahore textile workers are on Strike, protesting for jobs and wages. Afsaneh fired 50+ employees in March, kept them under notice period till 6 May & did not pay salaries for the month of May+April. All this while owners make millions!#boycottafsaneh#workersemergency