It’s a story I’ve been told a hundred times, to have a meal on your table for your family to feast on is a luxury. To only eat half way although you struggled to bring that food to the table is a sacrifice only the breadwinner of the house has to give but it is calming to know that your loved ones will sleep with full bellies.

In a part of Lahore you’ve probably never seen, called Fateh Garh, lives Tasleem Ejaz, a woman that has only known survival, and sacrifice.

Tasleem owns a small general store in Fateh Garh and runs it with her twelve year old son. Her daughter who is 13 is excelling in a field that is not traditionally female dominated, Islamic studies. She is humble by nature, though she exudes a natural confidence that you might expect comes with the territory of being a role model for her children. “I don’t think,” she says, “there’s any reason for anyone to not be humble.”

I arrive in an Uber that can only drop me a distance away from the store Tasleem owns. I make my journey ahead on foot, taking long steps over puddles and rivulets and shorter steps to save myself from wet mud – it has been quite the rainy day in Lahore.

The streets shrink, and the puddles grow deeper as I walk closer to the store. And we soon arrive, to the dark corner general store that is filled with essential groceries only, catering to the area the store is located in. Because people here can only afford the things that are needed. 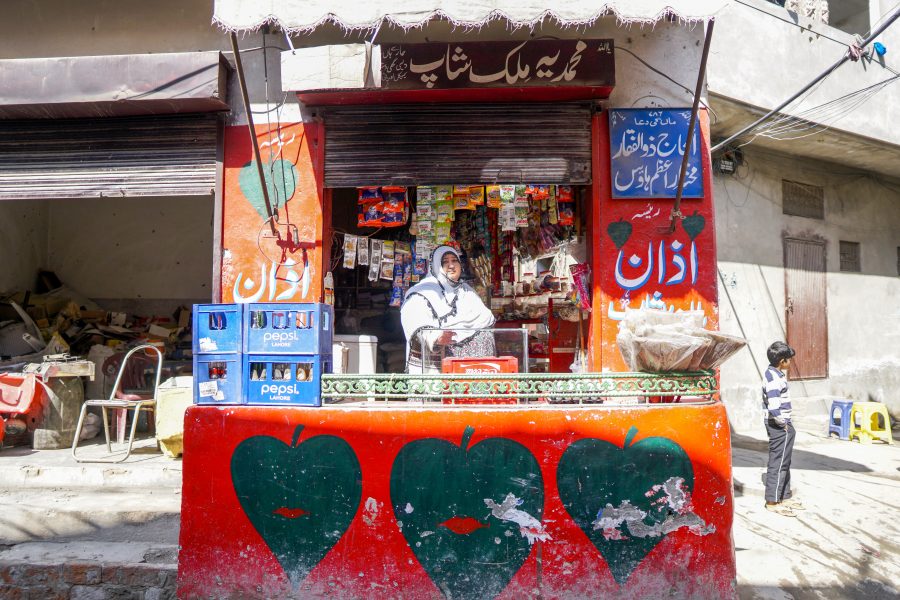 Pictured: Tasleem Ejaz at her shop in Fateh Garh

I sit on a stool, as Tasleem smiles at me, asking if I prefer thanda or garam, I decline and ask her about who she is. There’s a reason I am visiting her today, and that is to hear the story of how she was pulled from the edge of poverty.

“I was very worried,” she says, “before going to FINCA Microfinance Bank. I stumbled around for loans to start something and then someone told me to go to FINCA. And in the crisis I was in, I couldn’t afford my children going to school because my husband was sick and on bed rest and I wasn’t earning that much from sewing clothes. I managed to open up a small general store from the little I had saved but that wasn’t enough. A neighbor then told me about FINCA Bank. I went to them and they helped me. They gave me a loan to add small supplies to my store like aata, ghee, cheeni  and that  helped me to get a little stable .” she assured.

FINCA is an international, micro-finance bank, which has been operational for 30 years and is active in 20 countries across the globe. FINCA Pakistan, operates in 120 cities with 132 customer touch points, offering specifically designed loans for individuals running micro, small and medium-size enterprises.

“I’ve been earning for my son, my daughter and my husband for the past 13 years. 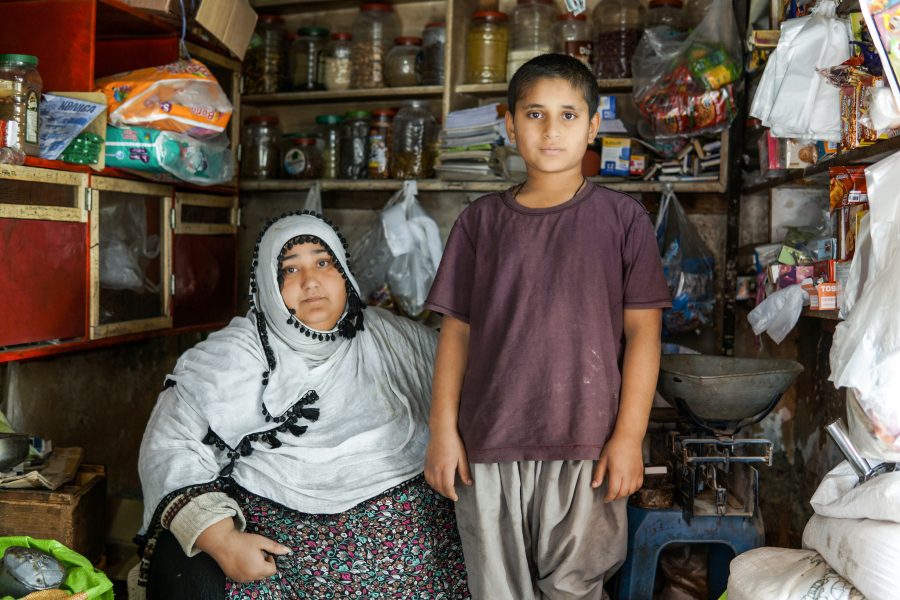 Pictured: Tasleem Ejaz with her son.

Just like this, in this store. I come to the store at 6 in the morning and I leave at 12 at night.” she continued, “I make around 50k a month,” she says and follows it with ‘Alhamdulillah’.

I ask her about her childhood in hopes to see her smile. And she does smile, as she tells me that she belonged to a ‘rich’ household. With luxuries and love. “I’m the youngest out of all the siblings,” she said, “My Mama and Papa have both passed away, and ever since hardship befell us, my siblings told me to leave everything and come back home but when I see my family and the faces of my children, I can’t. And I think in the midst of this hardship, at least we’re together, at least I can see my kids everyday” Tasleem adds, “Whatever we do, we’ll do it together, as a family, and we’ll work hard and who knows one day our time to shine will come too.” Everyone in the store syncs in saying ‘Inshallah’.

I pause to gather myself and then continue asking about what it is to be a woman who runs a shop like this.

She grins as if she knew I would ask her about feminine struggles, “Even in such progressive times, a female is treated as a female and a man is always dominant and respected. People here don’t think of women as anything they should respect. They treat them like they are nothing.”

“They don’t pay for what they buy sometimes, and say they’ll pay me later, but they don’t, and I have to go after them,” she further explains, “They pull us women back, always. They never push us forward. They pull me back, they have no empathy for me nor my struggles.”

“I was very young when I was married,” she said, “Life was going fine but  after my husband fell sick and we were getting burdened with crippling debt every day and it was a very hard time. But then FINCA Bank came into my life, and changed everything,” she continued “I’ve seen some really hard times, when there used to be food on my brothers and sisters table and not on ours and no one would ask us how we’re doing.”

She tears up as she shares her story, “I have never asked them for anything. All I have is ours and that is enough.”

“Times have changed,” she told me, “People have money for themselves but not to help other people. I belong to a very rich family but they did not support me, I supported myself.”

I concluded the interview by asking her how she feels now and how she sees her children in the future, to which she said that she was happy and glad that she can provide for her children and her family, “Alhamdulillah, we’re good. We struggled but we made it. Allah didn’t betray us, people did.” she added, “I want to help more people. When I was little I used to tell my Mama and Papa that one day I want to open a huge restaurant where poor people can come and eat all they want. It was my dream, and it still is just a dream.” She concluded by saying, “It’s been 16 years and my tears haven’t dried. I’ve seen hardship in its rough form. I’ve been pulled back. I tell my children that no one will pour food into your plate, you have to do it yourself. And it’s not fair how men treat women at all, a woman births a man, without us, they would not exist. We make contributions to society as much as men do if not more.”

FINCA Pakistan offers a wide variety of quick and easy loans, with minimal documentation enabling individuals such as Tasleem Ejaz to utilise their services with ease. ‘Niswan Karza’, is one of their loan products, specially designed for females where the terms and conditions of acquiring a loan are further eased which help business women expand their portfolios. FINCA is encouraging women from all walks of life to join its family; from tailors expanding their stitching units to teachers growing their school businesses and tuition academies, to salon, stationery and small shop owners. FINCA is always ensuring their customers are well taken care of. Even amidst the current Corona outbreak, FINCA has eased its loan repayment policies to support people in this crisis situation, realizing that businesses have been gravely affected and that the customer always comes first!

This article is part of a paid promotion in collaboration with FINCA Microfinance Bank Limited. For paid promotions at ProperGaanda, email at info@propergaanda.com