Love in 2020: Getting married during a pandemic and lockdown

Love in 2020: Getting married during a pandemic and lockdown

Nida and Bahawal, a young Pakistani couple, is one of many who tied the knot during the coronavirus outbreak – this is their story. 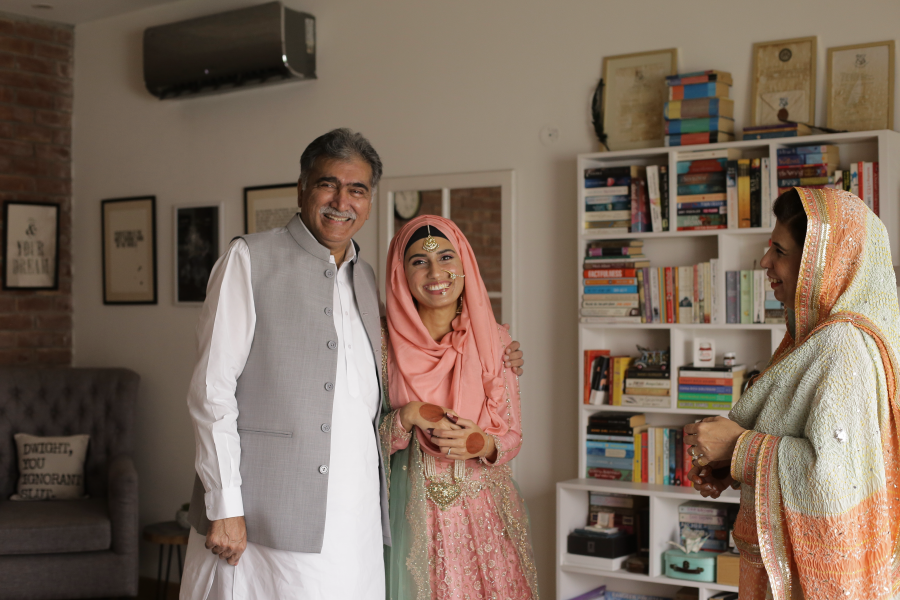 Nida, with her parents.

The coronavirus pandemic upended everything from the economy, health care industry to the thriving wedding culture – which seems an impossible feat. The business of weddings, like in any other densely populated South Asian country, is a lucrative and robust one in Pakistan, but it suffered quite a hit when the coronavirus pandemic broke out, with one problem overshadowing others: how do young people tie the knot without all the pomp and show?

But surprisingly, many couples opted for low key intimate weddings rather than putting them off entirely. One such couple is Nida and Bahawal, an economics lecturer and graphic designer who’s wedding was planned for early 2020; but as the date of their wedding neared, Pakistan imposed a lockdown to curb the spread of coronavirus. 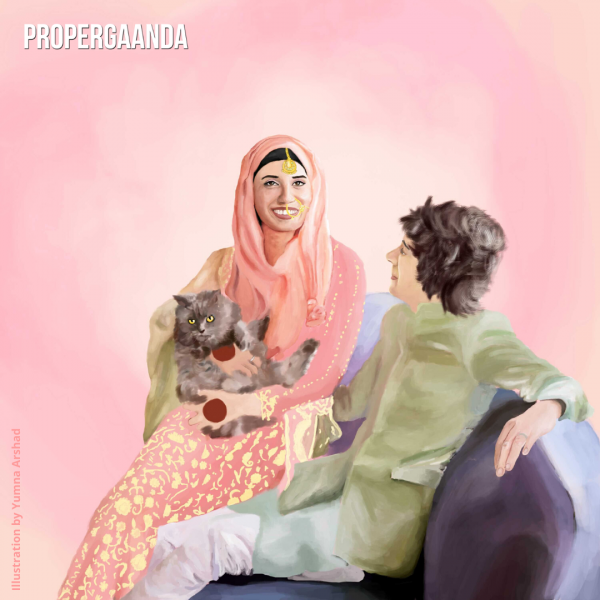 Illustration of Nida, Bahawal and Nida’s cat Mew by Yumna Arshad for ProperGaanda

Nida shares that she and Bahawal met at a gig, through mutual friends towards the end of 2019; one month later they were friends on Instagram and in another two months, engaged to be married. The young couple moved into an apartment after their wedding, right before Ramadan. While talking to ProperGaanda, Nida and Bahawal shared what it was like getting married during the pandemic and lockdown. 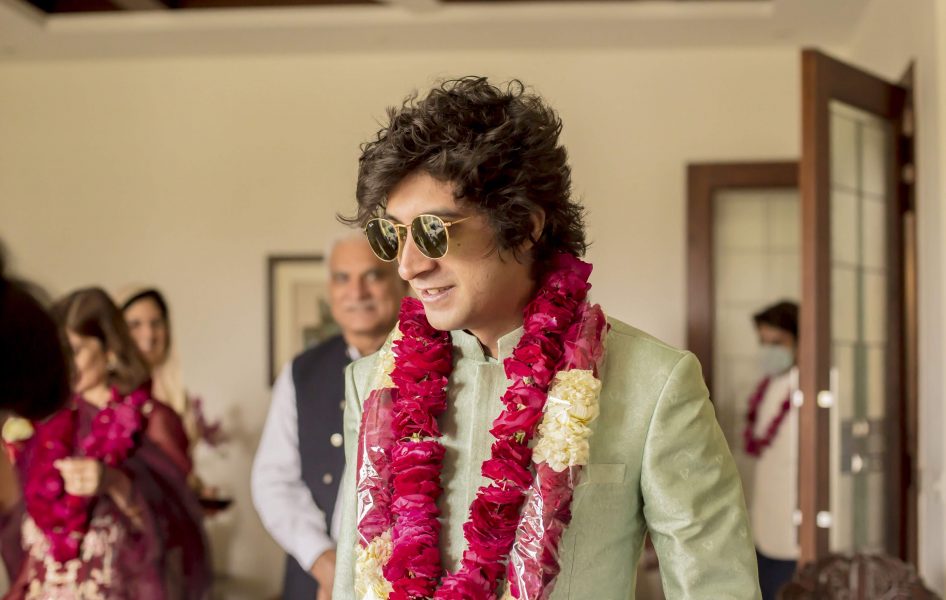 Bahawal, the groom as he arrives at Nida’s house for the Nikkah ceremony.

“Panic and confusion,” is how Bahawal describes his first reaction, when he found out how drastically their wedding plans had changed. “We had meticulously planned every detail of the days leading up to the wedding and the week after. The pandemic and ensuing lockdown threw them all out the window.” 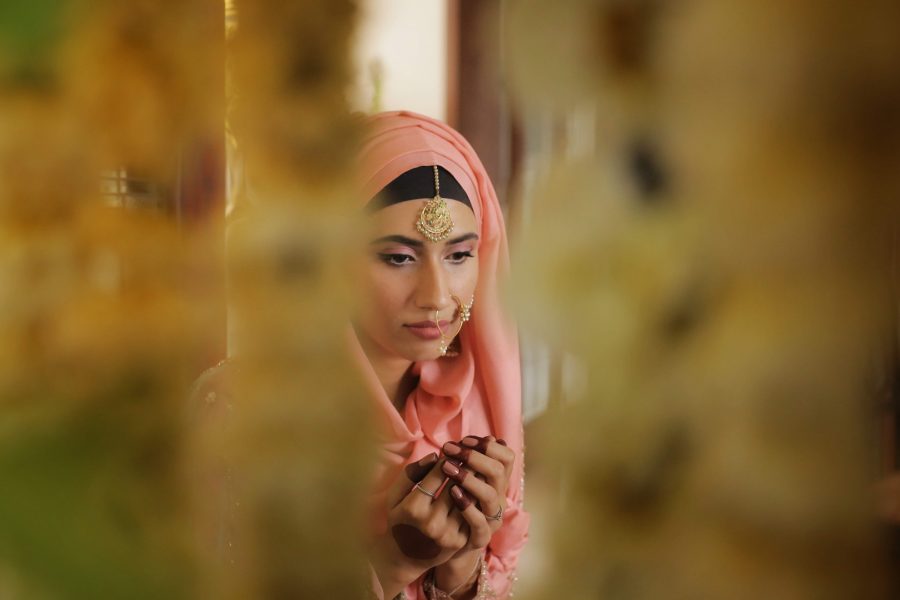 Nida, the bride, during the Nikkah ceremony.

“What compounded the anxiety was that our parents didn’t want to skip the ‘Big Fat Pakistani Wedding’ and we were naively hopeful that the lockdown would end in time and things could proceed as planned”. 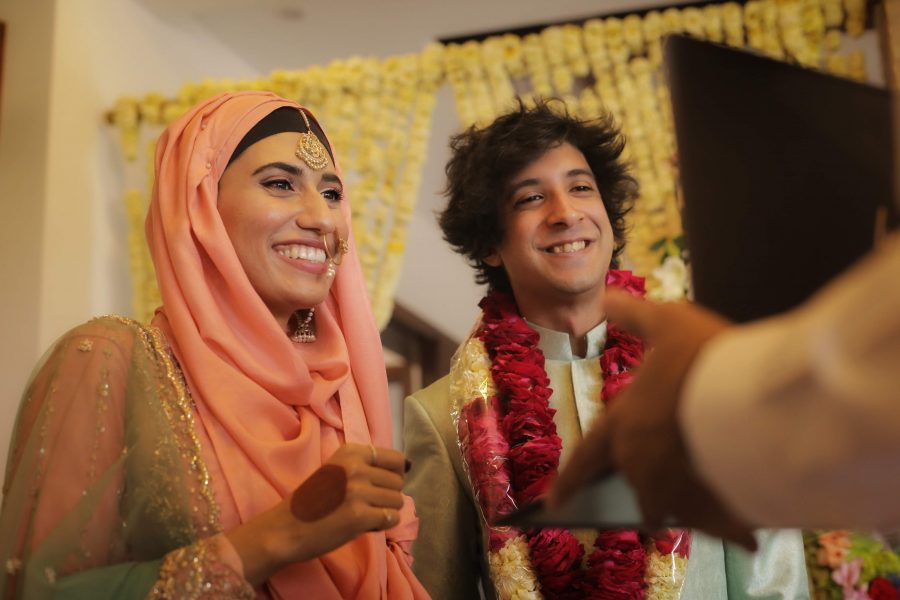 The couple talks to friends and family over Zoom.

The lockdown did have one silver lining though – Nida and Bahawal had planned a week’s getaway to Pakistan’s northern areas, putting off their actual honeymoon to Europe till the summer, so they’d get a break from the endless wedding dinners – but as things turned out, the newly wed couple started their lives together peacefully and without the fuss of lunches, brunches and dinners.

While talking about what the couple feels they missed out on the most, they said, “We had planned to have our Nikkah at Wazir Khan Mosque and Natasha Zubair was meant to photograph the event, that’s what we were possibly saddest about giving up. It was also a bummer that none of our family from abroad could make it. In fact we didn’t even have any of our friends at the wedding.”

“Most of our loved ones did join via Zoom, it wasn’t the same as having them physically present in the room.” 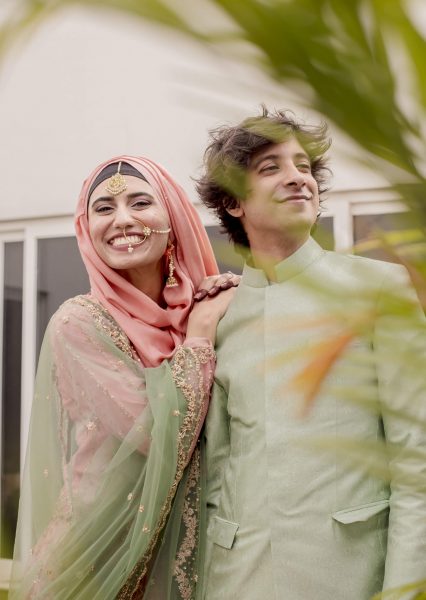 While much of the couple’s plans for the wedding changed, they decided to stick to the date. “It was an arbitrary date decided based on when it was most convenient for both of us to take time off from work but for us it was the day we were counting down to; it was when the rest of our lives would begin.”

“Before our plans changed due to Covid-19, the pomp and show of a big wedding was something we were just going to endure to be able to start our lives together. Minus the anxiety, we were quite glad to be spared the hassle.”

The wedding venue changed from Wazir Khan Mosque to Nida’s parents house with just the immediate family in attendance; Bahawal shares that there were barely 20 people in total and they had Nida’s cousin, Zaid, officiate the Nikkah instead of an Molvi. 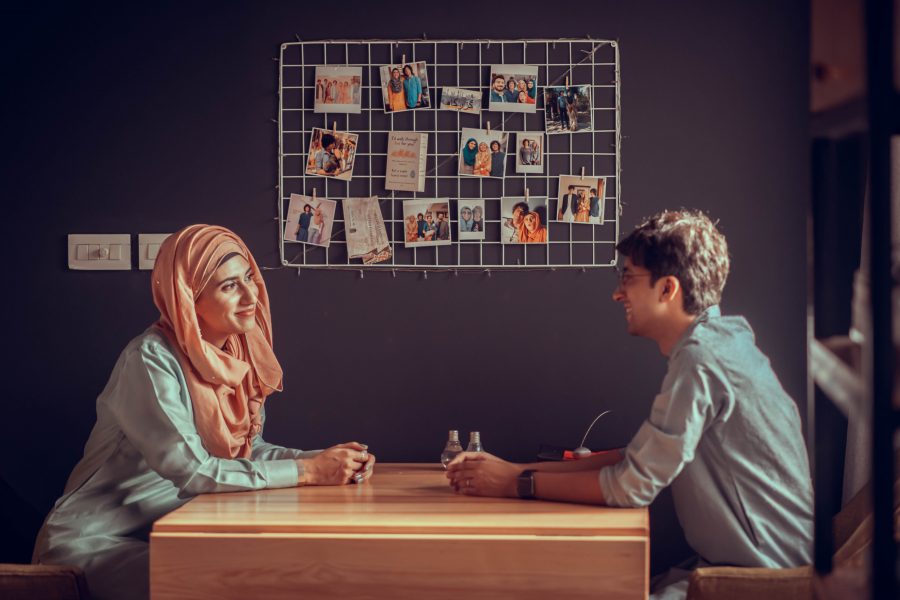 The newly wed couple at their new apartment

“Despite the lockdown, Nida’s mother and sister, Natasha, managed to decorate the house with flowers – they even got a photographer to cover the event while taking all precautions. Nida did her make up herself but that had been her plan all along.”

Intimate and magical are the two words Bahawal uses to describe their wedding, which felt even more special to the couple because they hadn’t meet for a few weeks due to the lockdown and only saw each other after saying ‘Qabool hai’.

“We never really wanted a big wedding; a small Nikkah followed by a grand reception was the compromise we had reached with our parents,” shares Nida, “We wanted people who truly cared for us to be in the room and to have the peace and liberty to luxuriate in the significance of the words we were uttering.” 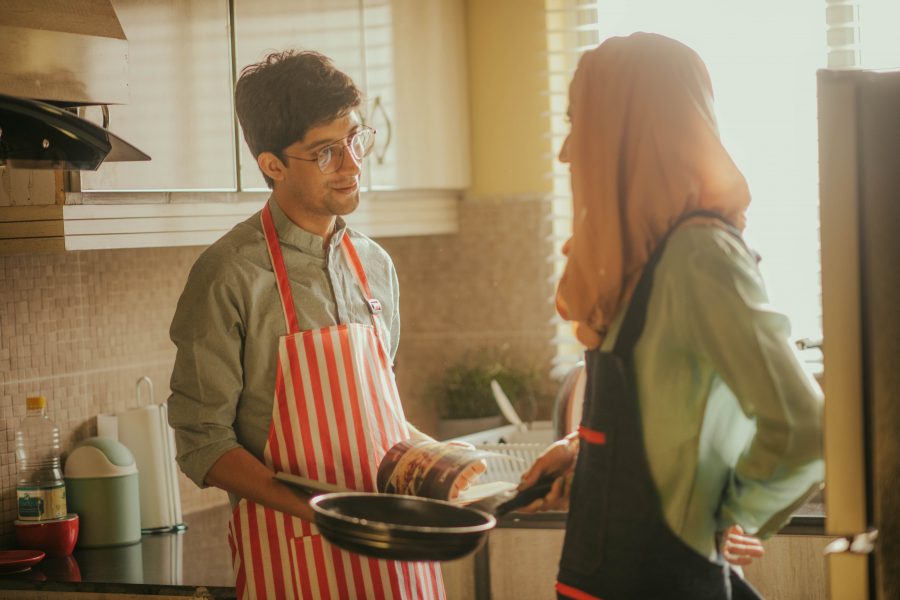 Nida shares that their reception has been indefinitely delayed and they’re hopeful that their parents will instead give them the money – which would normally be used to feed hundreds to guests – so they can travel. “We’ll spend all that money on the guests, half of whom won’t even know our names and will remain dissatisfied with the food or the décor or something else.”

Living together during the pandemic

“We moved into our apartment a week after our wedding and Ramadan started a week after that. It’s been … interesting. Nida and I are very different; she’s Type A and I’m very laid back. But when you’re living with your best friend, while you may argue about how often you clean the house or what movie to watch, all in all it’s a fun experience,” shares Bahawal. 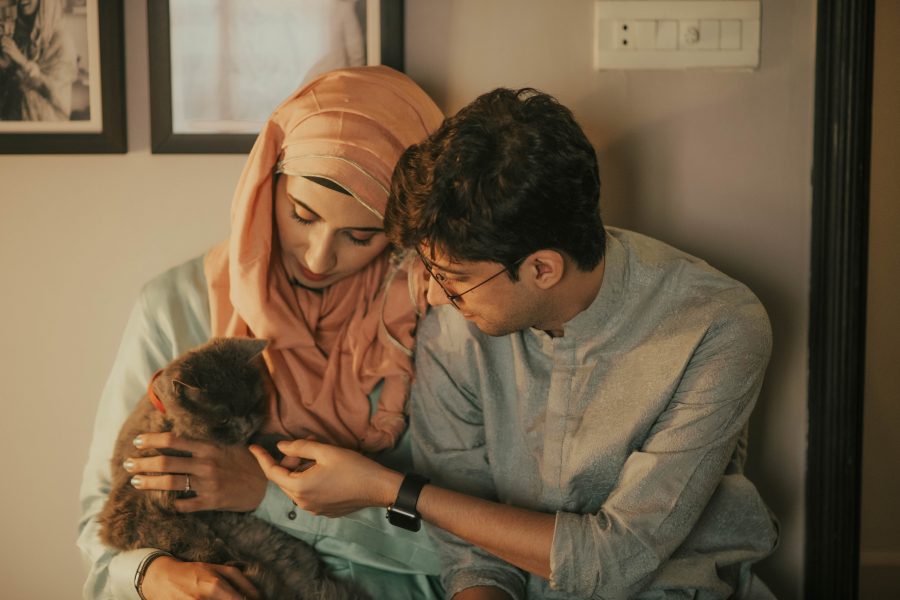 “We’ve gotten used to our bubble and are slightly intimidated by the thought of life returning to ‘normal’ though it would be nice to be able to see our friends and have them over. I guess getting used to living together took us a few weeks but we’ve found our comfort zone now and established a routine,” adds Nida. 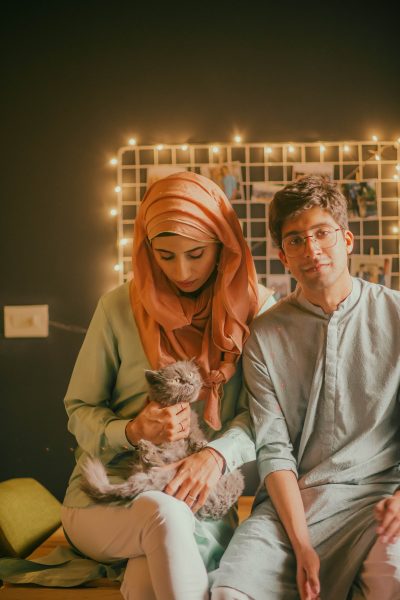 “When we look back at the last few weeks of married life, we cannot imagine how we could have ever set up our home or lives with such (relative) ease if we’d both gone back to work a week after the wedding. So in a way, at least for us, this lockdown was a blessing in disguise. We got the small Nikkah we wanted and working from home allowed us to spend all the time we wanted together.”

Do you have a story to tell? Reach out to us at info@propergaanda.com