As more and more allegations of harassment by teachers and other individuals of authority come forward, a student from the LGS Model Town branch reached out to ProperGaanda and, on the condition of anonymity, shared details of incidents that took place at the school, which the student states the administration is well aware of.

“In the light of current events many students have come forward with heart wrenching stories of abuse, harassment and victim blaming. As a student of LGS Model Town 137-E, I can assure you that many students who have come forward with stories of harassment at the hands of Sir Shahid have been invalidated time and time again by our school administration.”

The student shares that the institution started intimidating its students into silence, when allegations against a staff member, Mr. Faheem, were shared on social media and the school was criticized for sharming 13 to 16 year olds.

“I myself am a student of Sir Shahid who teaches physics, and since our O’ Level orientation day I have felt uncomfortable in his presence. He looks at us wrongly, invades our personal space, comments on our appearances.” 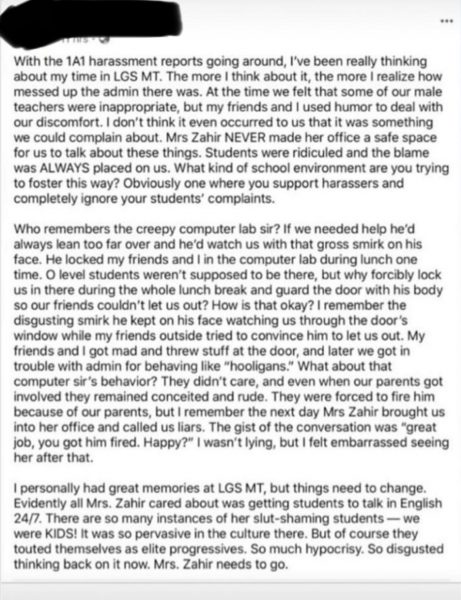 The account details that multiple students complained to their O’ Level administrator, who they identified as Ms. Nausheen, about the alleged inappropriate behaviour of Mr. Shahid, and were reassured that prompt action would be taken. However, after conversations with seniors it was discovered that senior batches had also made complaints, only to be blamed themselves.

“A student reported that apparently, she was told by the admin that it was all in their head and ‘you’re just caught up in the #metoo movement’ Similarly with us no action was taken and Sir Shahid wasn’t held accountable.” 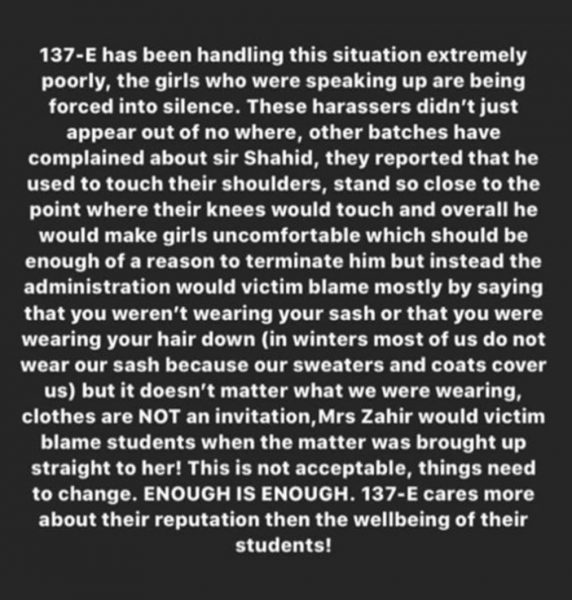 The student also shares incidents in which they were shamed by the admin.

“After the whole 1A1 situation, girls came forward with stories of harassment by Sir Faheem and slut-shaming at the hands of the admins. The batch of 2019 was accused of planning a sports fest just for the attention of boys or to invite their boyfriends. And the batch of 2015 was told by Mrs. Rubina Zahir that women who accuse men of harassment are terrible women who ruin the lives of men. Time and time again our administration has sexualized and slut shamed us by telling us that if we open our hair or wear certain clothing (western wear) we are asking for it and want attention from boys. And now we are being told by a teacher to remain off of social media and not to do anything. Furthermore, to behave like ‘educated civilized people’”

The student has shared screenshots uploaded by different students, sharing their own experiences of alleged harassment.

“I want to bring to attention what is happening in our institutes, to bring awareness and justice to all my school-fellows suffering due to these predators and abusers; as well as to make institutions safe again.”

This account was shared by a student of LGS Model Town who wishes to remain anonymous.