Recently a rumour spread like wild fire that Ali Rehman, the renowned Janaan actor was getting engaged.

Usually secretive about his personal life, pictures of him wearing a a large ring were circulating on social media. The actor refrained from addressing any stories related to him, until one day the news blew up. Pakistanis were ready to witness another celebrity wedding and they wanted to know who the bride was. 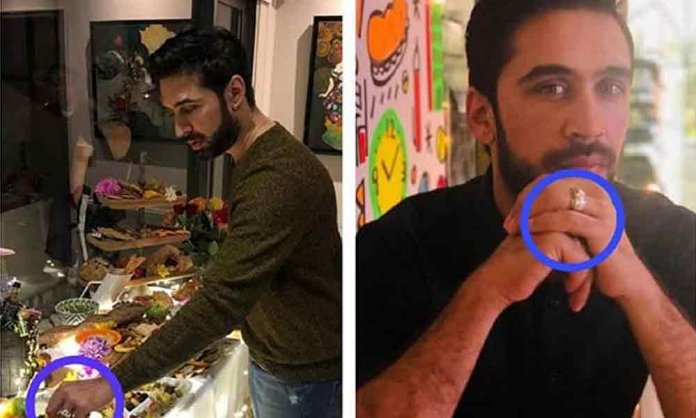 Ali then took to Instagram and finally announced that he was in fact getting married and the rumors were true.

Very enthusiastically, Ali invited the entire nation to his wedding, declaring that he would tie the knot on December 20th on live television on GEO’s morning show. He still didn’t unveil who his mystery bride was.

Putting all the rumours to rest and sharing my amazing news with all my fans tomorrow, 20th December! 10 am!

On December 20th, donned in a groom’s attire, Ali finally revealed who his bride was. Instead of a bride walking in, ‘dowry items’ were placed in front of him – a sewing machine, car keys, kitchen appliances, and gold jewelry amidst an array of other items.

Geo News Morning Show with Abdullah and Huma made a statement to stigmatize dowry, through an advocacy stunt involving the popular star. The stunt was part of a campaign encouraged by UN Women Pakistan to discourage the practice of forced dowry and related violence. It showcased how this practice makes a bride synonymous with material things like utility items, cash and gold.

The expectation of giving dowry to the groom’s family has been burdening the families of girls with the pressure of spending more than their means and, in many cases their entire life savings, on their daughter’s wedding. Many marriages in Pakistan involve the transfer of dowry from the bride’s family to the groom’s and often brides are punished for not bringing enough dowry items through emotional abuse and bullying, deprivation of basic needs, and even to the extreme of killing with stove-burnings which are portrayed as accidents.

We believe that this was a great initiative by Ali Rehman who took out the time to create awareness regarding vicious practices like Jahez.

This is what he had to say after the morning show aired:

Are you marrying a girl or her money? Real men don’t take Jahez! #StopJahezkhori #UNWomenPakistan

Team ProperGaanda recently released a video against the same issue which pollutes our society.

We talked about how families don’t spend money on their daughter’s education and instead, save up for dowry. Not only this, they misquote our religion to defend the concept of jahez, shushing anyone who dares to speak against it.

Let us know what you think in the comments below!