12 Ahmadis That Keep Most Of Pakistan Up at Night

12 Ahmadis That Keep Most Of Pakistan Up at Night

The hashtag ‘Ahmedi’ has been trending in Pakistan again, after Attock Assistant Commissioner Jannat Hussain Nekokara was forced to apologise for speaking about equal treatment of minorities, including that of Ahmedis. This has led to another debate on social media regarding the treatment of this sect within Pakistan. So we at ProperGaanda decided to look into some notable contributions made by Ahmadis to the socio-economic and political fabric of our country. So, let’s see what is so ‘dangerous’ about this minority group and how they threaten “Quaid’s Pakistan” that we all so eagerly wish to revive.

Let’s start with the government and army

First foreign minister of Pakistan; first Asian and only Pakistani to preside over the UN General Assembly and the International Court of Justice. A man with such credentials was surely a threat to the foundations of Pakistan in her early years. No wonder the Pakistani society is in shambles today; it all dates back to this man’s government service no doubt. Also, fun fact and a shocker for most self-anointed protectors of the faith: Sir Muhammad performed Hajj in 1967, even though today our ‘constitution’ and a mere declaration on the passport forbids Ahmadis from doing so.

Known as the hero of Rann of Kutch, he was the most senior Pakistani military officer who gave his life for the country in the Indo-Pak war of 1971. But, it appears we prefer our generals with a pinch of arrogance and a whole lot of disdain for the civilian population instead of an Ahmadi one. 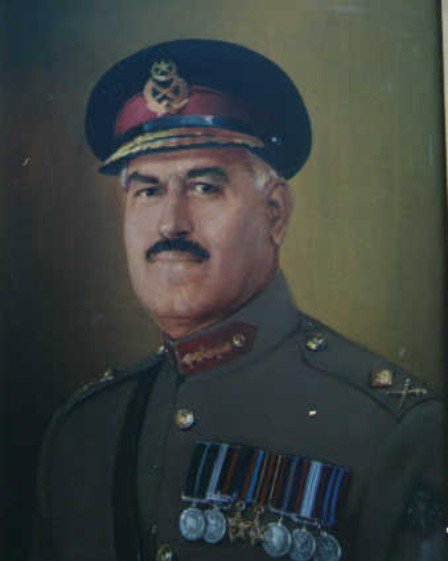 Serving in the Indo-Pak War of 1965, he won us the largest tank battle since WWII in Chawinda against India. His allegiance lay with Pakistan yet we point our guns in the direction of the very community responsible for giving us this esteemed officer. ‘Quaid’s Pakistan’ is an ideology we all wish to recreate, but do we really pay heed to what his vision really was? Quaid wished for a place where there was no “distinction of class, colour, religion or creed”. Today, however, we insist on forming all socio-economic and political policies on the very premise that some religious beliefs are superior to others.

First Chief of Air staff in the Pakistani Airforce, he served as a three-star airforce officer till 1974. He is also one of the founding members of the Human Rights Commission of Pakistan. This man worked for the rights of others in Pakistan. We must now ask ourselves, is the very community he belonged to being granted the same?

Awarded the Sitara-i-Jurat for his service, he unflinchingly volunteered to fly numerous combat missions against the Indian Air Forces in 1965. Losing his life in the eighth mission, he fought to protect the country even when he was not scheduled for duty. To all our patriotic citizens out there: Isn’t this the kind of zealousness our nationalist discourse usually celebrates? Why must we limit our appreciation to a specific religion or sect, when Quaid himself said Pakistan is a place where all religious minorities shall have their privileges as long as they are “loyal and owe true allegiance” to the state.

A brilliant tactician, he was responsible for Operation Grand Slam in Jammu and Kashmir during 1965 Indo-Pak War. Minister of Foreign Affairs at the time, Zulfiqar Ali Bhutto is recorded to have lauded General Malik’s achievements in the war. Interestingly, it was the same Bhutto who later as Prime Minister passed the 2nd amendment to the 1973 constitution, which declared Ahmadis to be non-Muslims. Talk about turning your back on serving officers of your country. Today, we are no different.

Now, let’s turn to the civilians!

An experimental physicist, he discovered new isotopes that aided medical research, particularly in the treatment of cancer. He also participated in Atoms for Peace– an international initiative that works on peaceful energy generation for third world countries such as Pakistan. Does this man thwart our government? What was his nefarious agenda that threatened our nation? If you are speechless, you know the answer.

A well known contemporary artist with a mastery of the miniature style of painting. Wasim has her artwork displayed in several notable museums such as Whitney Museum of American Art and Brooklyn Museum of Art. Currently residing in the US,  she claims her artistic perspective is shaped by her struggles as a Pakistani Ahmadi. A woman, an artist AND an Ahmadi? We can see why she might be a nightmare for those elements in society who work tirelessly to ensure that the patriarchal structure of our country goes unchallenged.

He bagged the highest literary honor in Pakistan- the Adamji Award for his Urdu poetry and was one of the most celebrated Ghazal writers of modern times. He also served as Chairman of Pakistan Television Corporation; a post he eventually forcibly resigned due to his Ahmadi faith in 1978. We proudly celebrate artistic forms like the ghazal as a representation of the unique “Pakistani culture”. Yet, we so conveniently deny the artist’s entry into mainstream society, just because they belong to a different religious identity.

He was an accomplished Pushto poet, journalist, teacher and linguist who was awarded the Sitara-i-Imtiaz for his services in the field of literature by the Benazir Bhutto government. Momand was also the President of the Peshawar Press Club and President of the Khyber Union of Journalists for various tenures. The only danger possible from this Ahmadi is that he promoted a regional language. This would obviously not sit well with loyal patriots with provincialist tendencies, who, unfortunately, are many.

He is a leading poet and lyricist in the rising media industry of Pakistan who has penned works for various films and singers such as Nazia Hassan and Sajjad Ali. Well, our society’s disdain for Ahmadis becomes pretty self-explanatory with this entry on the list. We love to call out people who spread a singular version of ‘immorality’ in society. Surprised he hasn’t been labeled wajib-ul-qatal yet for his efforts to reduce negative garbage churned out by mainstream media nowadays.

He has become the symbol of Ahmedi oppression in Pakistan even though his accomplishments gave the country boast-worthy material for times to come when he became the first Pakistani to win the Nobel Prize in Physics in 1979. A theoretical physicist with a host of achievements, he worked effortlessly to develop peaceful nuclear energy in Pakistan. We totally see why Capt. Safdar took a particular dislike towards Prof. Salam in his rant. Didn’t he know that nuclear energy is only meant to scare off our timeless enemy India? Who cares if he tried to connect science and religion for Muslims in the country. His Ahmadi faith is enough to warrant the defamation of his legacy.

This list is in no way exhaustive of all the individuals from the Ahmadi community making Pakistan proud worldwide. But, the inability to find more names speaks volumes of how selective we are in celebrating our citizens.

“Quaid’s Pakistan” is surely under threat. However, the country is not vulnerable because of the Ahmadi community. It is endangered because we conform to the exact opposite of what the founding father’s vision really was.

These Pakistanis Are Not Being Allowed to Vote and We Can’t Stand It
Rida Khalid July 24, 2018

Abdus Salam Centre to Be Renamed in a Decision of Historic Hypocrisy
Editorial Desk May 4, 2018

This Pakistani ‘model’ cat fished the internet with his photoshop skills

This is how Lajwanti is building a more diverse shaadi culture, one dress at a time

This song sounds like how we feel since the pandemic hit

Why are Indian cannabis dealers switching over to selling hash oil?

15 Questions with Lahore based Stylist and Fashion Connoisseur Mehek Saeed

Will Turkish actress Esra Bilgic be working with Peshawar Zalmi?

Here’s a wild sequel to the last Jinn story

Why do Disney’s diversity policies have a loophole when it comes to Pakistani representation?

Dr. Atif Mian and the Postmortem of Progression